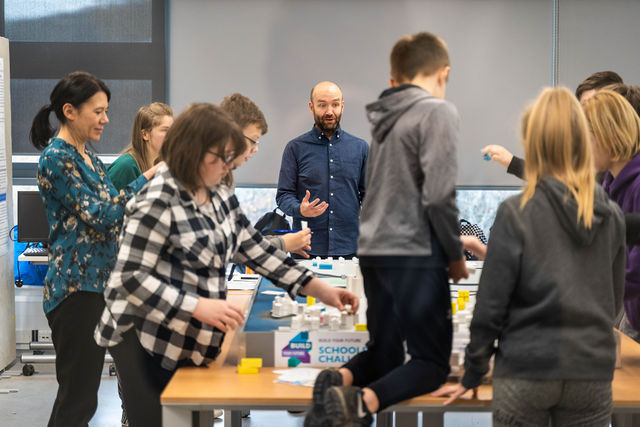 Following a relatively quiet summer Autumn it feels like The ASA have had a hectic Autumn.

In September I was invited to represent The ASA at an event hosted by ASPC in the centre of Aberdeen.  The event was titled ‘Improve to Move’ and was aimed at informing potential or current house sellers on how to prepare their property for the housing market.  The ASA’s role in the event was to provide information on the Building Warrant process and also to show the value of good design.  The planning side of things was covered by a planning consultant, Maggie Bochel of Aurora Planning, and Estate Agency Director of Aberdein Considine, Alan Cumming, provided information on the market and how to make your property sellable in a tough market.

Our annual Design Awards entry period opened in early October and there has been the usual flurry of initial entries.  So far these are dominated by single domestic architecture, which is perhaps reflective of the current local economic climate.

We presented the Silver Medal award to the best students in their final year at The Scott Sutherland School of Architecture.  The interdisciplinary awards ceremony celebrates the achievements of students across the entire built environment school.  It was good to see students take pride in the award and had travelled some distances to attend.

We asked ASA members to submit a piece or ‘art’ to be displayed in our Portrait of a Place exhibition.  The brief was relatively simple, works had to be portrait format and represent a place in Aberdeen or Aberdeenshire (or a wee bit of Moray).  They should also be between A5 & A4 in size.  The 25 submissions were varied in terms of materials, mediums, styles and subjects.  The works were on display in a city centre café known for exhibiting local artist’s work for 2 weeks and some of the works were purchased by visitors, with the profits going to The Butterfly Trust.

I took part in the judging process for the DIA Awards.  Jon Frullani, Jack McKeown (Dundee Courier) and I spent 2 pleasant days touring Perth and Kinross, Dundee, Angus and Fife viewing some really interesting architecture.  We formed a shortlist from the information submitted, which was a variety of photographs and drawings.  There were some clear stand out winners once they were viewed in person.  The awards were presented in Dundee on 14th November.

I had the pleasure of attending the long-awaited opening evening of the Aberdeen Art Gallery, renovated by Hoskins Architects.  It’s quite a dramatic change for the better and one to be celebrated, and so far it appears that Aberdeen is doing just that, quietly feeling that they’ve got something better than the V&A.  There’s nothing wrong with a healthy domestic cultural rivalry.

We are part of the committee for the inaugural Build Your Future Schools Challenge, which has seen heats take place across Aberdeen City and Aberdeenshire throughout October and November.  ASA provided a task and assistance during one of the events, which was held at RGU, Garthdee.  We tasked groups of 10 second year pupils from local secondary schools to create their own ‘sustainable city’.  We made use of a model city which played a prominent part in our FOA 2016 events.  We had always intended for the model to be used in schools following FOA 2016, and now it has and should continue as RGU have taken ownership of the model for use in the future.  I for one was glad to see some real positive legacy of FOA 2016.

At the time of writing this report we are still preparing for the Build It Aberdeen – Construction & Property Conference.  This is a one day event which this year is focussing on sustainability and innovation in the construction industry.  Hopefully by the time we’re all reading the papers for the RIAS Council the event has gone off without a hitch.  ASA have played a pivotal role on the organising committee, supported by local marketing company Mearns & Gill.  This takes place on 29th November.

Also by the time we’re reading this report we should have had a CPD looking at two contract related areas: disputes in construction contracts, and how to avoid; and recent changes to SBCC Minor Works.  Both topics are being presented to ASA members by Len Bunton.  This takes place on 3rd December.

Posted on December 3, 2019 in Uncategorized